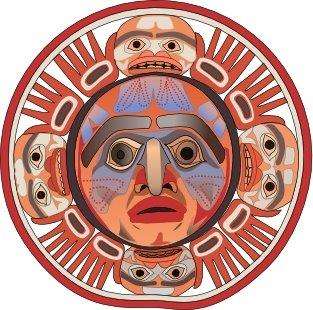 The Culture Department works to protect, restore, and enhance the integrity of Nuxalk ancestral knowledge, practices, and governance. Our work is grounded in the deep relationships Nuxalk have with the land and waters and is committed to protecting Nuxalk culture and language for the Putl’lt – those who are not yet born.

When the world was being created our earth was like an island floating in an ocean of stars; ever moving in the cosmos of outer space. This is what is known about our first ancestors when Alhkw’ntam created the earth. We Nuxalkmc believe everything is interconnected and has spirit. At the beginning the world was fixed and prepared by our Creator and his four carpenters to be ready.

Our first ancestors were made in Nusmata, the House of Smayusta, the Creator’s house in the upper world. There were 45 original families; each had their own room in the house. They were carved from the cosmic tree - Tcncniyaaq, the Milky Way, and they were given cwmnwas (spirit) placed in the bone of the back of their neck, and given slhup’tsta (breath). They came alive and were given skwatsta (names), asulicts (food, provisions, and tools), stl’cw (code of ethics), sxayaxw (protocols). All of these were placed within their nuslhiixwta (treasure box).

The Creator said, “look to the walls of my house.” Hanging there were animal, bird, and sea creature cloaks. They were told to select the cloaks they liked and they put them over their backs the same way we wear our dance cloaks today, and they sinaaxwmiixw (danced). After they finished the dance, the Creator opened the sky and threw his sun blanket over himself, transforming into the sun. The ancestors did the same, throwing their cloaks over themselves and transforming into animals, birds, and sea creatures (ravens and eagles, grizzly bear, black bear, whale, killer whale, mountain goat and wolf, great blue heron, duck, seal, and deer). Guided by the eyelashes of the sun they floated down to the mountaintops. They removed their cloaks and the cloaks floated back up to Nusmata. They would not see the cloak again until four days after death, when it’s time for the spirit to ascend to the upper world.

The first ancestors journeyed down the mountain and found places to build their houses and their fish traps; soon they began to prosper and villages were formed. The land was bountiful, and their houses began to fill up to the ceiling with boxes of goods. This is when the Creator spoke to the people, instructing them to lhlm (potlatch), to invite their neighbours from far and wide, to tell the story of how the Creator placed them on the land and to share their wealth, validating their su7ulm (rights) to the land.

The sisters and daughters of these first families now began to marry and travel to their husband’s villages. The elders described this arrangement like a rope connecting her village to her husband’s. Once children were born the rope was tied tight, forever linking these lineages together. This is how women created the boundaries of the four territories.

Nuxalk elders and archaeologists discovered that Nuxalk oral traditions match the geological records in the four territories and they determined that our ancestors have been here for over 14,000 years, creating a timeline that divides Nuxalk history into three eras: the early period (14,000 – 9,000 BP), the middle period (9,000 BP – 5000 BP) and the great period (5,000 BP – contact). During this time there were four catastrophes: the falling of the sky, the burning of the world, the flood and the famine. These catastrophes tested our civilization; from these experiences we established our protocols and laws for enduring difficult times.

The fourth period begins with contact (1793 – present). This period is when Nuxalk people are enjoying a fully developed society, culture, economy and system of governance, and we have established our autonomous Nuxalk Nation with respect for the inclusive laws that governed the entire coast. Nuxalk managed a specific economy through the trading of sluq’ (eulachon grease) that began at the mouth of eight eulachon-bearing  rivers in Nuxalk territory and stretched east to the Rocky Mountains and beyond, facilitating trade routes that lasted thousands of years.

However, contact eventually brought another four catastrophes that would shape the Nuxalk Nation into its present-day conformation: the Usqalits’ txw, (smallpox epidemic of 1862), the relocation from ancestral territories to reserves, the Potlatch Ban of 1884 - 1951, and the forced attending of Residential Schools from the 17th century to 1990s.

The Usqalits’ txw reduced Nuxalk people from an estimated 30,000 living throughout the four territories in 50 towns and villages, to approximately 300 survivors. These 300 people were brought together by Chief Waxit Pulhas (Pootlass) at Q’umk’uts, who married 11 high-ranking women. This unusual marriage was necessary to bring the survivors together and preserve their ties to their ancestral territories as dictated by Nuxalk law, enabling them to work the land at Q’umk’uts and rebuild the Nation.

In 1921, the last citizens of Kimsquit and Talyuumc joined Chief Pootlass at Q’umk’uts. Further arranged marriages fused the remaining lineages, resulting in the creation of the modern-day Nuxalk Nation. The Snuxus (Sun Mask), the Nation’s shared crest, depicts these events. The Snxus  connects Nuxalk back to the past with its depiction of the four carpenters representing the four Nuxalk territories together as one, and the 40 fingers representing the 40 ancestral lineages from the surviving village sites all together. The centre figure, Alhkw’ntam, also represents Pootlass as the high chief and affirms his role as Chair.

Today, Nuxalk have seven reserves total, measuring about 2,025 ha; this is approximately 0.1% of our ancestral territory. Our registered population now numbers 1,787 people, with approximately half living on Bella Coola Indian Reserve 1, which encompasses the communities of Q’umk’uts (townsite) and Snxlhh (4Mile).

Nuxalk is a non-treaty nation; we view our land as our legal inheritance from the Creator. We have always been an independent Nation and we will continue to exercise our rights and title throughout our four territories as entrusted to us by our ancestors.

Nuxalkmc today are practicing living our Stl’mstaliwa, the full human experience, which enables us to Nuyalcalhlaycilh wa mnmnta ala mnmnts’ilh ats ~ clear the path for our next generation to succeed. Uts’i

Smaw Ti Slq'ilh
One Heart, One mind
BACK TO TOP